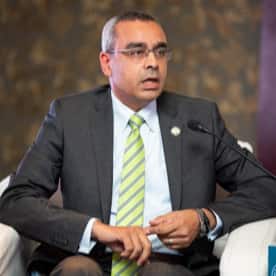 Osama Mobarez has 30 years of experience in the Oil & Gas industry. He is currently the Secretary General of the East Mediterranean Gas Forum; Osama had a key role in the establishment and activities of the East Mediterranean Gas Form (EMGF), In his previous role at the Egyptian Ministry of Petroleum and Mineral Resources as the Undersecretary for Technical office, he was responsible for the Realization Office to drive Egypt’s Modernization Program across the Oil & Gas sector. Over his career he supported the development of policies and reforms within the petroleum sector in Egypt including; a comprehensive energy subsidy reform strategy, initiation of gas market reforms, modification and update of upstream agreements, and feasibility studies of infrastructure development projects. Osama led bi-lateral cooperation with other countries on oil and gas topics, as well as communication with financial institutions and oil and gas organizations. He was Egypt’s representative in the Executive Board of the Gas Exporting Countries Forum (GECF), and the International Energy Forum (IEF). He was also the Chairman of the Organizing Committee of Egypt Petroleum Show EGYPS, the biggest oil and gas show in Africa and Southern Mediterranean. Osama holds an MBA with Distinction from Edinburgh Business School, Heriot Watt University UK, and completed Post- Graduate Studies in Economics of Energy at Reading University UK.