CERAWeek brings together global leaders to advance new ideas, insight and solutions to the biggest challenges facing the future of energy, the environment, and climate. CERAWeek is widely considered to be the most prestigious annual gathering of CEOs and Ministers from global energy and utilities, as well as automotive, manufacturing, policy and financial communities, along with a growing presence of tech. It has been described by the Financial Times as the ‘the Davos of energy,’ and by Politico as the “industry’s Super Bowl.” CNBC called it “the world’s preeminent energy conference.” CERAWeek was rated one of the top five overall “corporate leader” conferences in the world. 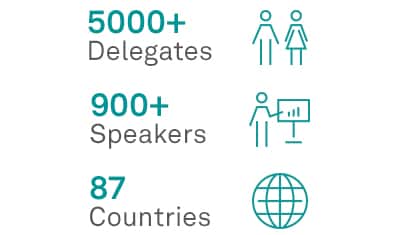 The CERAWeek community is a unique gathering of top global energy executives and leading members of the industrial, automotive, manufacturing and technology communities, as well as public policy-officials, financial institutions, tech, and thought leaders.

This March, we are delighted to reconvene the CERAWeek community in Houston. This year’s theme is “Navigating a Turbulent World: Energy, Climate and Security”. The global energy industry is facing a welter of uncertainty and change -- driven by the effects of the global pandemic; shifting geopolitics and a war launched by one of the world’s major energy powers; high energy prices; supply chain and infrastructure constraints; and economic instability.

CERAWeek 2023 will explore in-depth the strategies for a world in turmoil. The energy industry continues to grapple with the twin challenge of meeting the world’s growing energy demand while reducing emissions. Designing the world’s energy systems for a lower carbon future remains paramount. How will the industry navigate the turbulence and lead the global transition to a sustainable, secure, abundant and affordable future? CERAWeek will offer insight on the energy future -- and on emerging strategies and solutions.

Daniel Yergin, S&P Global Vice Chairman, serves as Co-Chairman of CERAWeek. Dr. Yergin is a highly respected authority on energy, international politics and economics. He was described by Fortune as “one of the planet’s foremost thinkers about energy and its implications”; by TIME as the “one man whose opinion matters more than any other on global energy markets”; and by the New York Times as “America’s most influential energy pundit.” Dr. Yergin is author of the Pulitzer Prize- winning book, as well as The Quest: Energy, Security, and the Remaking of the Modern World.

Each year, CERA clients gathered for a few days in Houston, Texas to attend the executive conference where they gained insight into the energy future while connecting with their peers. Over time, the program was expanded to five days of informative sessions and networking opportunities—and named CERAWeek.

The CERAWeek program provides comprehensive insight into the global and regional energy future by addressing key issues and has become the world’s premier energy event.  The conference is distinctive in the extraordinary depth and breadth of its content, attracting global thought leaders and shaping the global energy agenda.