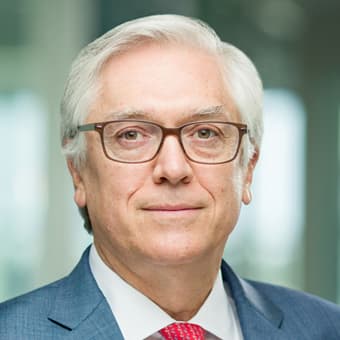 Andrés Gluski was named President and CEO of the AES Corporation in 2011. Under his leadership, AES has become a world leader in implementing clean technologies, including energy storage and renewable power. The past two years, AES has been ranked in the Wall Street Journal’s Top 250 Best Managed Companies. In 2022, AES was named to Fast Company's 2022 list of the World's Most Innovative Companies. Guidehouse has consistently ranked Fluence—AES’ joint venture with Siemens—as the #1 grid-scale energy storage integrator in the world. Andrés also established sustainability and corporate social responsibility goals that resulted in AES’ inclusion in the Dow Jones Sustainability Index for North America and designation as one of the World’s Most Ethical Companies by the Ethisphere® Institute for nine straight years. In 2021, the company established new aggressive carbon reduction goals including a target to achieve net zero carbon emissions from electricity sales by 2040 and last year AES announced its intent to exit generation from coal by the end of 2025. He also serves as Chairman of Council of the Americas and is a member of the Board of Waste Management. Andrés is a magna cum laude graduate of Wake Forest University and earned his MA and PhD in economics from the University of Virginia.