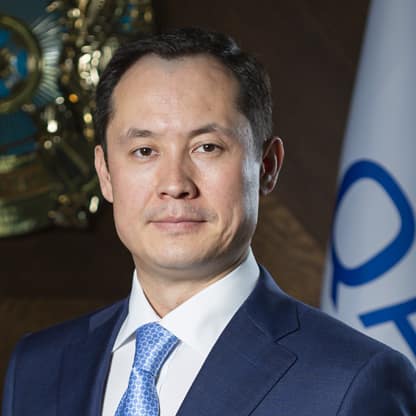 Chairman of the Management Board

Sanzhar Zharkeshov is Chairman of the Management Board of National Company “Qazaqgaz” JSC, a role he has held since February 2022. From 2020 to 2022, he was Deputy CEO for Geology and Development at Naftogaz and Deputy Director of Exploration and Production Division of Ukraine National Oil and Gas Company “Naftogaz.” Prior to that position, Mr. Zharkeshov was the Vice Minister of Ecology, Geology and Natural Resources for the Republic of Kazakhstan, where he supervised the geological industry from 2019 to 2020. From 2018 to 2019, he served as Managerial Adviser and Global Oil and Gas Industry Expert at the London office of McKinsey and Company for projects in Columbia, Oman, Russian Federation, Alaska (U.S.) and United Kingdom. From 2016 to 2018, he held roles as Head of Field Supervisors and Senior Drilling Engineer at Merlin ERD, in Perth, Scotland. From 2010 to 2016, Mr. Serikbayevich was a Drilling Engineer at ExxonMobil Corporation in California, Colorado and Texas (U.S.) and in the Atyrau region of Kazakhstan; Senior Drilling Engineer in Iraq; Supervising Drilling Engineer in Russian Federation (Sakhalin Island); Senior Project Engineer for well ties at the oil and gas complex treatment unit of Kashagan project in Atyrau, Kazakhstan. From 2008 to 2010, Mr. Zharkeshov served as a Research Engineer at the Center for Petroleum and Geosystems Engineering to improve oil and gas recovery using chemical technologies, Austin, Texas, United States. Mr. Zharkeshov has been awarded “For Innovation,” Houston, Texas, United States and the “SPE Drilling Engineering Award” by the World Society of Petroleum Engineers in Baku, Azerbaijan; the Queen Elizabeth II’s Award for Enterprise “For Contribution to the Development of the U.K. Oil and Gas Industry” (as part of Merlin ERD), London, United Kingdom. He is also a member of the Council of the British Institute of Mechanical Engineers, and a holder of “Chartered Engineer” British title. Mr. Zharkeshov graduated from Kazakh University of Economics, Finance and International Trade with a degree in finance and University of Texas in Austin, U.S., with a degree in oil and gas engineering. He speaks Kazakh, Russian and English.