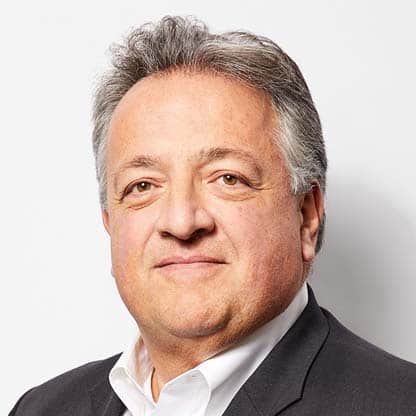 Dr. Noubar Afeyan is founder and CEO of Flagship Pioneering, an enterprise where entrepreneurially minded scientists invent pioneering solutions to challenges facing human health and sustainability. Dr. Afeyan is a lecturer at Harvard Business School; and from 2000 to 2016 was a senior lecturer at MIT’s Sloan School of Management where he taught courses on technology-entrepreneurship, innovation, and leadership. He teaches and speaks around the world on topics ranging from entrepreneurship, innovation, and economic development to biological engineering, new medicines, and renewable energy. Dr. Afeyan has co-founded and helped build over 40 life science and technology startups during his career as an inventor, entrepreneur, and CEO. He was founder and CEO of PerSeptive Biosystems, a leader in bio-instrumentation that grew to $100 million in annual revenues. After PerSeptive’s acquisition by Perkin Elmer/Applera Corporation in 1998, he became senior vice president and chief business officer of Applera, where he initiated and oversaw the creation of Celera Genomics. Noubar currently serves on the boards of a number of public and private Flagship companies, including Moderna (NASDAQ: MRNA), where he is chairman, Rubius Therapeutics (NASDAQ: RUBY), Cellarity, Omega Therapeutics, Tessera Therapeutics, and others. Previously, Noubar was a member of the founding team, director and investor in several highly successful ventures including Chemgenics Pharmaceuticals (acquired by Millennium Pharmaceuticals), Color Kinetics (acquired by Philips), Adnexus Therapeutics (acquired by Bristol-Myers Squibb) and Affinnova (acquired by AC Nielsen). Dr. Afeyan is a member of the Corporation of MIT (the Institute’s governing body) and a member of the board of trustees for the Boston Symphony Orchestra. Together with his partners, Noubar has launched philanthropic projects including the IDeA Foundation, UWC Dilijan School, 100 LIVES, and the Aurora Prize for Awakening Humanity to raise awareness of the world’s most pressing humanitarian problems. A passionate advocate of the contributions of immigrants to economic and scientific progress, Noubar received the Golden Door Award in 2017 from the International Institute of New England, in honor of his outstanding contributions to American society as a U.S citizen of foreign birth. He was also awarded a Great Immigrant honor from the Carnegie Corporation in 2016, received a Technology Pioneer award from the World Economic Forum in 2012, and was presented with the Ellis Island Medal of Honor in 2008.