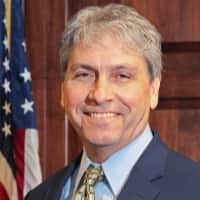 Michael Caron is a Utility Commissioner of the Connecticut Public Utilities Regulatory Authority (PURA). Governor Dannel P. Malloy nominated Caron to serve on the three member regulatory authority on July 12, 2012. His appointment was confirmed by both the House of Representatives and State Senate in the 2013 session of the Connecticut General Assembly. Commissioner Caron is the Authority's former designee to the Connecticut Siting Council and is PURA's representative to the Connecticut Economic Resource Center (CERC). He also serves as Treasurer of the New England Council of Public Utility Commissioners (NECPUC) and is a member of the Electricity Committee for the National Association of Regulatory Utility Commissioners (NARUC) and was appointed last year to the NARUC Telecommunications Task Force by past President Commissioner Lisa Edgar (FL). He has also been appointed through DEEP as one of Connecticut's representatives on the Eastern Interconnection States' Planning Council (EISPC). Prior to his appointment, Caron was the Director of Public Affairs – Global Sites for Pfizer, Inc. and an associate lobbyist for the lobbying and business development firm Camilliere, Cloud & Kennedy. Caron previously served as a State Representative from the 44th District for nine terms (1991-2009) and Assistant Republican Leader for five terms (1999-2009). During his time as a member of the General Assembly, Caron served on the Finance, Revenue & Bonding Committee, as Ranking Member of a number of legislative committees including the Transportation Bonding Sub-Committee. He was a member of the Energy and Technology Committee and was an ex officio member of the Connecticut State Bond Commission. Caron introduced and worked for passage of the Fuel Cell Energy Tax credit and the High Performance Building legislation for state bonding projects. Caron also headed Caron Strategy and Consulting, a public policy firm and worked in the financial services industry as Registered Investment Advisor. Caron has been active with several community organizations, including: the Southeastern CT Enterprise Region Board of Directors and the Community Health Charities of New England where he served as Chairman of the Board. Additionally, he has served as the Vice-Chair of the United Mental Health Services Board of Directors and the Chair of the Northeast Economic Alliance Board of Directors. Caron received his B.A. in History and a B.S. in Finance from Central Connecticut State University. He lives in West Hartford with his wife Maureen.