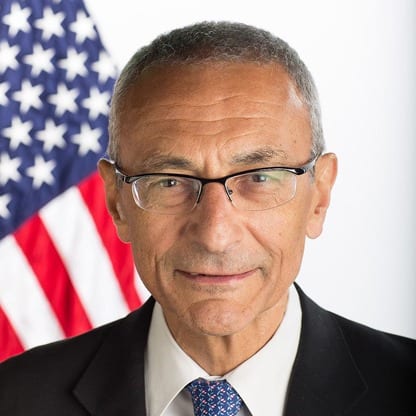 John Podesta is Senior Advisor to the President for Clean Energy Innovation and Implementation. He is the founder and chair of the Board of Directors for the Center for American Progress, and Chairs the board of ClimateWorks Foundation and serves on the Board of the Climate Jobs National Resource Center. Podesta served as counselor to President Barack Obama, where he was responsible for coordinating the administration’s climate policy and initiatives. In 2008, he served as co-chair of President Obama’s transition team. He was a member of the U.N. Secretary General’s High-Level Panel of Eminent Persons on the Post-2015 Development Agenda. Podesta previously served as White House chief of staff to President William J. Clinton. He chaired Hillary Clinton’s campaign for president in 2016.