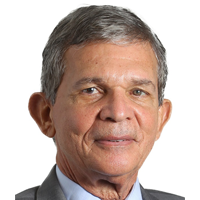 Mr. Joaquim Silva e Luna is Petrobras’ CEO. He was the Brazilian Chief Executive Officer of Itaipu Binacional. He is a Reserve Army General and was Ministry of Defense until January 2019, reaching the highest level in his career. He holds post-graduate degrees in Projects and Systems Analysis at the University of Brasilia, post-graduate degrees in Army Policy, Strategy and Senior Management, a Master's degree in Military Operations, and a PhD in Military Sciences. Some of his positions include Commander of several Construction Engineering Companies in the Amazon, instructor at the Officer Training School and at the Army Command and General Staff School, Head of the Intelligence Sector in the Land Operations Command and the Press Section of the Army's Social Communication Center, Commander of the 6th Construction Engineering Battalion, Commander of the 16th Jungle Infantry Brigade, Director of Assets, Chief of Staff of the Army Commander, Chief of Staff of the Army, Staff Secretary, Education, Health and Sports of the Ministry of Defense, General Secretary of the Ministry of Defense, Minister of Defense and Chief Executive Officer of Itaipu Binacional. He was the first military officer to hold the positions of General Secretary of the Ministry of Defense and Ministry of Defense. While abroad, he was a member of the Brazilian Military Instruction Mission and Engineering Advisor in the Republic of Paraguay as an instructor at undergraduate, graduate, and doctoral schools, and Defense Attaché for the Navy, Army, and Air Force in the State of Israel. He served as a Board Member of Amazônia Azul Tecnologia de Defesa S.A. (AMAZUL) for three years.