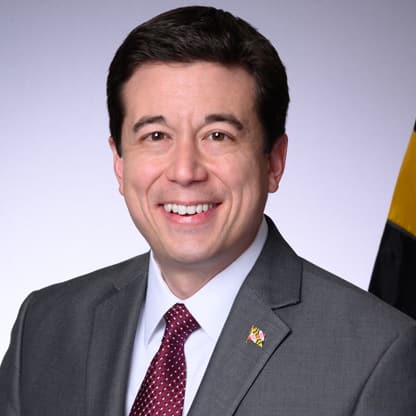 Jason M. Stanek was appointed Chairman of the Maryland Public Service Commission by Governor Larry Hogan for a five-year term beginning on July 1, 2018. He most recently served as Senior Counsel to the Energy Subcommittee of the U.S. House of Representatives’ Committee on Energy and Commerce where he advised on matters involving national energy policy, with specific focus on electricity issues and the operations of the regional power markets. Before that, he served in senior positions at the Federal Energy Regulatory Commission (FERC), advising both a FERC Chairman and Commissioner during his 16-year tenure. Prior to arriving in Washington D.C., he held legal positions with the National Fuel Gas Company in Buffalo, New York, and the Commodity Futures Trading Commission in New York City. Chairman Stanek was named co-chair of the Joint Federal-State Task Force on Electric Transmission—an initiative of the Federal Energy Regulatory Commission (FERC) and the National Association of Regulatory Utility Commissioners (NARUC), co-vice chair of NARUC’s Commission Chairs’ Council, vice chair of the Electric Vehicle Working Group, and is a member of NARUC’S Committee on Electricity and the Committee on International Relations. He also serves on the Board of Directors for the Regional Greenhouse Gas Initiative (RGGI), is a member of the Center for Public Utilities Advisory Council and the Critical Consumer Issues Forum (CCIF) Advisory Committee. Chairman Stanek earned his law degree from the State University of New York at Buffalo and a bachelor’s degree from Tulane University. He also completed studies at American University and the University of North Carolina at Chapel Hill. He is admitted to practice law in New York. He lives in Riverdale, Maryland.