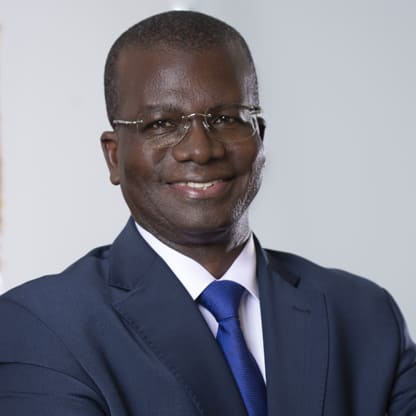 Mr. CAMARA is the Minister of Mines, Petroleum and Energy of the Republic of Côte d’Ivoire since the 6th of April 2022. Mr CAMARA has an extensive 36-year experience in the energy sector including 35 years in oil refining. Before his appointment as Minister, Mr CAMARA was Chief Executive Officer of LA SIR, an Ivorian crude oil refining company, from 2012 to 2021. Before that, from 2007 to 2012, Mr CAMARA was CEO of the Multinational Company of Bitumen (SMB), a subsidiary of LA SIR. From an entry-level process engineer position in LA SIR in 1986, Mr CAMARA climbed all the stairs, going through positions such as Head of Econonic Studies, Crude Scheduler, Director of Production, and Commercial and Economic Director up to the top. In his position of CEO of LA SIR, Mr CAMARA pulls the company back from the brink of bankruptcy by leading a 1 billion USD restructuring plan that brought the company into a new era of sustained profitability. Mr. CAMARA graduated from Institut National Supérieur de l’Enseignement Technique of Côte d’Ivoire (INSET, 1986) with a General Engineering Degree and holds a Postgraduate degree in Energetics from Ecole Nationale Supérieure des Arts et Métiers in France (ENSAM – 1992). Mr. CAMARA is a Commander in the National Ordre of Côte D’Ivoire.