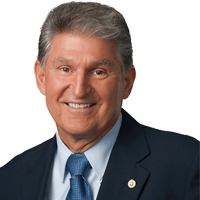 U.S. Senator Joe Manchin (D-W.Va.) was sworn into the United States Senate on November 15, 2010 to fill the seat left vacant by the late Senator Robert C. Byrd. For Senator Manchin, serving as West Virginia's Senator is truly an honor and a privilege. Born and raised in the small coal mining town of Farmington, W.Va., Sen. Manchin grew up learning the values that all West Virginians share —family, common sense, fairness and hard work. As a small businessman, he learned firsthand from his grandfather, Papa Joe, the importance of serving the public. As a young man, his beloved grandmother, Mama Kay, inspired Senator Manchin's belief in public service through her unflagging compassion and desire to help those less fortunate. More than anything, it is his family and the values he learned growing up among the hardworking men and women of West Virginia that define who Senator Manchin is and the public servant he strives to be. From his days as a state legislator to his six years as Governor to his current role, Senator Manchin has always been committed to his philosophy of "retail government" —in other words, connecting with all of his constituents and making service to them his top priority. Throughout his public life, he has never let politics or ideology stand in the way of commonsense solutions. Instead, he believes that only by putting politics aside and working hard to bring people together can we do what is right for West Virginia and the nation. He began his tenure as West Virginia's 34th governor in January 2005. Then-Governor Manchin approved millions of dollars in tax relief for West Virginia's citizens and businesses, fixed the state's workers' compensation system, established the first comprehensive teacher pay package in more than 15 years and dramatically decreased the state's debt. In six years, more than $13 billion in business investments were made, and West Virginia was often cited nationally for its strong fiscal management. As a Senator, Joe Manchin is committed to bringing this same spirit of bipartisanship to Washington. As he has done throughout his entire life, he remains committed to working with Republicans and Democrats to find commonsense solutions to the problems our country faces and is working hard to usher in a new bipartisan spirit in the Senate and Congress. He believes that government should act as a partner, not an adversary, in helping to create the environment that produces American prosperity. Senator Manchin also firmly believes that our nation can and must do what he did in West Virginia - get our fiscal house in order. He believes we must find commonsense ways to cut spending while keeping our promises to our seniors and veterans by protecting Social Security and Medicare. Senator Manchin is strongly committed to developing a balanced national energy plan that utilizes all of our resources and recognizes that fossil fuels will be a vital part of our energy mix for decades to come. He believes that a balanced, commonsense approach that considers the needs of our environment and the demands of our economy through innovation not elimination, can and must be developed if we are to achieve energy independence within this generation. Senator Manchin currently serves as the Chairman of the Senate Energy and Natural Resources Committee, and also serves on the Senate Committee on Appropriations, the Senate Committee on Armed Services, and the Senate Committee on Veterans' Affairs - four critical committees that tackle the important work of addressing our nation's energy needs, overseeing discretionary spending, standing up for our veterans, and defending our nation.