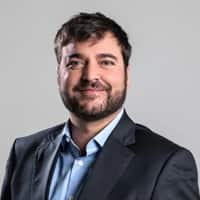 Jaime Pumarejo Heins was born in Barranquilla. He has a Bacherlor Degree in Information Systems Administration from Purdue University, Indiana, United States. He has a master's degree in Business Administration with an emphasis in finance, from the Business Institute of Madrid, Spain. He was secretary of Atlantic Economic Development and advisor for competitiveness in the first administration of Mayor Alejandro Char. He was responsible for the process of dismantling the harmful concessions that were bleeding the District. His resume also highlights his position as Secretary of Mobility of Barranquilla. He was general manager of the Puerta de Oro Caribbean Convention Center, one of the largest infrastructure projects in the city. He has had other important positions through which he has contributed to the progress made by the capital of the Atlantic. He served as City Development Manager, where he was in charge of high impact projects such as Siembra Barranquilla, the construction of parks and stream channeling, among others. In addition, he coordinated emblematic projects of the city such as the Great Malecon of the Magdalena River and the infrastructure of the Central American and Caribbean Games. There he was until 2017 when he was appointed Minister of Housing.