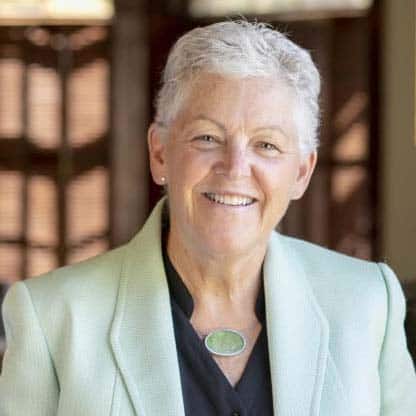 Gina McCarthy served as the 13th Administrator of the Environmental Protection Agency, and is currently the President and CEO of the Natural Resources Defense Council. One of the nation’s most trusted and accomplished voices on climate issues, she has been at the forefront of environmental and public health progress in a variety of leading roles for over three decades. In her time leading the EPA, McCarthy oversaw successful efforts to reduce greenhouse gases, mitigate air pollution, conserve critical water sources, and safeguard vulnerable communities from chemical hazards. She spearheaded the Obama-Biden Administration’s Clean Power Plan, which set America’s first-ever national standards for lowering carbon emissions from power plants, and helped pave the way for the Paris Climate Agreement. Prior to her current role with the NRDC, McCarthy was a professor at the Harvard T.H. Chan School of Public Health and currently serves as chair of the board of directors of the Harvard Center for Climate, Health, and the Global Environment. Throughout her career, McCarthy has advised five administrations of both Democratic and Republican Massachusetts governors on environmental matters, and she served as Commissioner of the Connecticut Department of Environmental Protection prior to being appointed by President Obama to head up the EPA’s Air Office. As EPA administrator, she pursued innovative global collaborations with the United Nations and the World Health Organization, and on global efforts to address pollution. Born and raised in Boston, McCarthy graduated from the University of Massachusetts Boston and earned a master of science at Tufts University.