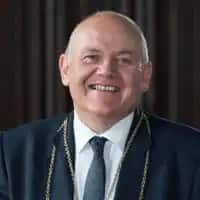 The Honorable Barney Crockett, Lord Provost, Aberdeen City, is the 293rd Lord Provost, a title that goes back 700 years and combines the roles of Mayor and Her Majesty’s Lord-Lieutenant. Aberdeen is the energy capital of the UK. Mr. Crockett is Vice President of World Energy Cities Partnership, the organization based in Houston that unites internationally recognized energy cities. He is the President of the European Association for Hydrogen and Fuel Cells and Electromobility (HYER), the hydrogen and electromobility organization of the European Regions. Mr. Crockett is an authoritative voice on energy affairs and as such has been interviewed by a large number of worldwide media outlets, including The New York Times, Financial Times, Neue Zurcher Zeitung, Handelsblatt, and the The Irish Times. Additionally, he has been interviewed by CNBC as well as appearing on television and radio in the UK, Norway, Italy, Japan, and Switzerland. Mr. Crockett has been trustee to several pension funds and is an Executive Board Member of the Local Authority Pension Fund Forum (LAPFF), the umbrella group for UK Local Government Pension Funds.