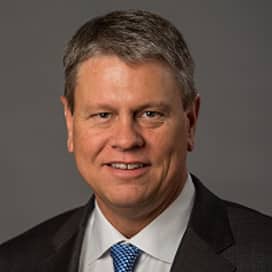 Doug Berven joined POET in March 2003 and has served the organization in several key roles since then. In his current role as Vice President of Corporate Affairs, Berven promotes the corporate objectives of POET, the importance of agriculture, and the benefits of biofuels domestically and internationally. Berven currently sits on BIO’s Industrial and Environmental Section Governing Board, the U.S. Grains Council Ethanol Advisory Team, the U.S. Farmers and Ranchers Alliance Executive Committee and Board, Fuels Institute Advisory Board, is a Senior Advisor to Solutions From the Land, is an Emeritus Board Member of the American Council on Renewable Energy, is the Executive Director of the South Dakota Ethanol Producers Association, and serves on several other industry associated work groups, committees and associations. He has also served on several of POET’s plant Boards of Directors. Berven also manages strategic corporate relations for POET, promotes state, national and international policy objectives for the industry, and is a recognized authority on biofuels, renewable energy and agriculture. Prior to joining POET, Berven held various roles in banking, real estate development and medical consulting. Berven received his Bachelor of Science degree in Business Administration from Augustana College in Sioux Falls, S.D., where he currently resides with his wife and two children.