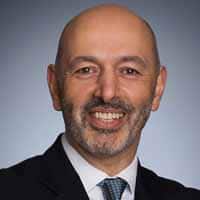 Demosthenis Pafitis is Chief Technology Officer, a position he assumed in February 2020. Pafitis is responsible for Schlumberger New Technology Development, Digital Technology Development and Manufacturing. Prior to his current appointment, Pafitis served as senior vice president of Schlumberger 4.0 Platforms. Pafitis joined Schlumberger in 1991 and worked in the research and engineering organization in Cambridge and Houston. In 2000, he assumed responsibility for marketing and technology introduction of Schlumberger rotary steerable systems and directional drilling services. He later held research management positions in Boston, USA and Cambridge, UK. In 2007, Pafitis was appointed vice president engineering for Schlumberger Oilfield Services. In 2012, he assumed the position of GeoMarket manager for Malaysia, Brunei and Philippines. In 2014, he served as global vice president engineering, manufacturing and sustaining. Pafitis holds a bachelor’s degree in materials science and engineering from the University of London, and a doctorate in materials science and engineering from the University of Cambridge, UK. He is a Chartered Engineer in UK.