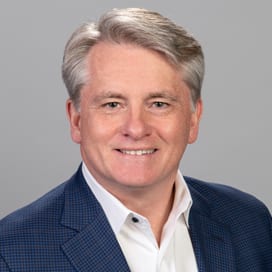 Originally from Manchester, U.K., David (Dave) Andrew holds a Bachelor of Science with honors from McMaster University, Canada, and a Ph.D. in chemistry from the University of Western Ontario, Canada. Dave joined ExxonMobil in 1994 as part of the research department of the company’s Canadian affiliate, Imperial Oil. He worked on various product development and exploratory research projects and holds multiple patents. Dave moved to Imperial Oil’s products and chemicals business in 1998 to manage improvement projects at the refinery and chemical plant in Sarnia, Canada. In 2000, he assumed responsibility for Imperial Oil’s asphalt, basestock and specialty products businesses across Canada. In 2004, Dave joined ExxonMobil’s Belgium affiliate heading up its asphalt and heavy products business for Europe, Africa and the Middle East. He was responsible for distribution, marketing and trading of asphalt produced at ExxonMobil’s nine refineries and blended at various terminal operations across the region. Dave moved from Brussels to Fairfax, Virginia, in 2007 to lead ExxonMobil’s global aviation business with responsibilities for aviation lubricant product development, manufacturing, distribution, sales and marketing to the general, military and commercial aviation industries. During this period, ExxonMobil launched a new, revolutionary jet oil for next-generation aircraft, the first major product development in this area in more than 20 years. In 2009, Dave was appointed Global Manager of Planning and Strategy for the Lubricants & Petroleum Specialties Company. Three years later, he led the merger of ExxonMobil Fuels Marketing Company and ExxonMobil Lubricants & Petroleum Specialties Company and was subsequently appointed General Manager of Planning and Strategy of the consolidated company. Dave directed a new venture to form the ExxonMobil Catalysts and Licensing Company in 2015, and he was subsequently appointed its president. This company focuses and providing high performance catalysts and process technology to the global refining, chemicals and gas treating industries. In 2017, Dave was appointed Vice President of Chemical and Fuels & Lubricants Sustainability where he spearheaded efforts to develop high-impact sustainable solutions for plastic waste and other circularity initiatives. In 2020, Dave was appointed VP of New Market Development for ExxonMobil Chemical Company. In this capacity, he is responsible for strategic business development including circularity and plastic waste advanced recycling, new high-value product platforms, lower GHG products, and other sustainability-driven global business opportunities. Dave has triplet sons and one daughter. He loves sailing and tries to spend as much time on the water as possible.