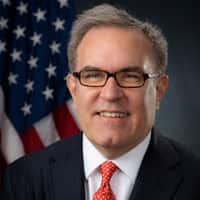 Hon. Andrew Wheeler is the fifteenth Administrator of the US Environmental Protection Agency, confirmed by the US Senate on February 28, 2019. Prior to his confirmation, he served as Acting Administrator of the EPA beginning in July 2018. He was previously confirmed by the US Senate as the Deputy Administrator of the EPA in April 2018. Hon. Wheeler has dedicated his career to advancing sound environmental policies. His first job following law school was at the EPA as a career employee. He served as a Special Assistant in the Pollution Prevention and Toxics Office, where he received three bronze medals. After his time at EPA, Hon. Wheeler moved to Congress where he eventually became the Majority Staff Director and Chief Counsel of the Senate Committee on Environment and Public Works. Throughout his career, he has received bipartisan support and recognition for his work and leadership.