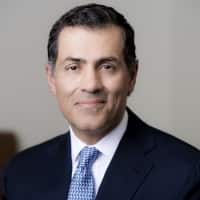 Vali Nasr is the Majid Khadduri Professor of Middle East Studies at the School of Advanced International Studies of Johns Hopkins University. Between 2012 and 2019 he served as the Dean of the School, and between 2009 and 2011 as Senior Advisor to U.S. Special Representative for Afghanistan and Pakistan, Ambassador Richard Holbrooke. He is the author of The Dispensable Nation: American Foreign Policy in Retreat; Forces of Fortune: The Rise of a New Middle Class and How it Will Change Our World; The Shia Revival; and Democracy in Iran; and numerous articles in scholarly journals. He has advised businesses and world leaders including the President, Secretary of State, senior members of the Congress, and presidential campaigns, and has written for New York Times, Foreign Affairs, Financial Times, Wall Street Journal, and Washington Post. He is a member of International Boards of Advisors of the Blavatnik School of Governm ent at Oxford University, the American University of Beirut, and the Rajaratnam School of International Studies in Singapore. He is a Carnegie Scholar for 2006. He received his BA from Tufts University,  Masters from the Fletcher School of Law in and Diplomacy in 1984, and PhD from MIT in 1991.