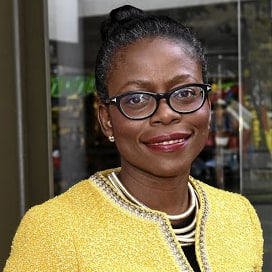 Presidency of the Republic of South Africa

Trudi Makhaya is a writer, economist and entrepreneur. In April 2018, she was appointed as full time economic advisor to His Excellency President Cyril Ramaphosa. In this role, she provides technical support to the President on economic policy. This includes regular input on key issues and initiatives (such as the Investment Drive, Economic Reconstruction and Recovery Plan, just transition and green economy, Operation Vulindlela) interfacing with relevant advisory councils and engaging with economic policy stakeholders. Trudi also serves as South Africa’s G20 sherpa. Before taking up this role, Trudi was CEO of Makhaya Advisory, a boutique consulting firm with a focus on helping business navigate economic policy, including competition policy (anti-trust), that she founded in 2015. Trudi has also served as an advisor and angel investor in young companies. She has held non-executive directorships at Vumelana Advisory Fund and MTN South Africa. An active public commentator, Trudi was a columnist for various publications, including Daily Maverick, Business Day and Acumen. She has also published academic journal articles on competition economics and policy. Trudi holds an MBA and an MSc in Development Economics from Oxford University, where she studied as a Rhodes Scholar. From the University of Witwatersrand, she holds an MCom in Economics, an honours degree in economics and a BCom in Law and Economics. Trudi was an economist and later a member of the executive committee at the Competition Commission of South Africa from 2010 to 2014. Prior to joining the Competition Commission in 2010, Trudi held various management consulting and corporate roles at Deloitte South Africa, Genesis Analytics and AngloGold Ashanti. Trudi enjoys creative writing. Her recent work has been published in New Contrast (Summer 2016) and the Sol Plaatje European Union Poetry Anthology Vol IV. A former league debater, Trudi represented Wits at two World Universities Debating Championships (Manila 1999, Sydney 2000).