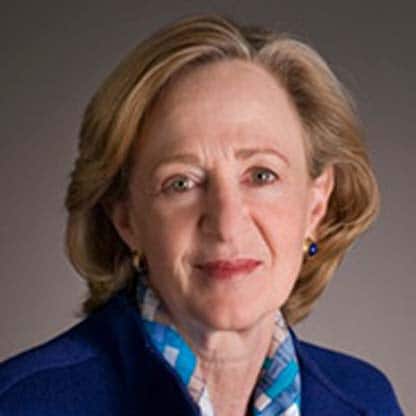 Susan Hockfield is President Emerita, Professor of Neuroscience, and a member of the Koch Institute for Integrative Cancer Research at the Massachusetts Institute of Technology. She is the author of the 2019 book The Age of Living Machines: How the Convergence of Biology and Engineering Will Build the Next Technology Revolution. From 2004 to 2012 she served as the sixteenth President of MIT, the first life scientist and first woman in that role. As President, Dr. Hockfield advanced Institute-wide programs—including founding the MIT Energy Initiative—in sustainable energy and the convergence of the life, physical, and engineering sciences, with impact across the region, nation, and world. She helped shape national policy for energy and next-generation manufacturing, appointed by President Barack Obama in 2011 to co-chair the steering committee of the Advanced Manufacturing Partnership, and by serving as a member of a Congressional Commission evaluating the Department of Energy laboratories in 2015. Before joining MIT, she was the William Edward Gilbert Professor of Neurobiology, Dean of the Graduate School of Arts and Sciences, and Provost at Yale University. Dr. Hockfield is the Past President and Chairman of AAAS and currently is a Director of the Charles Stark Draper Laboratory, Partners HealthCare System, Fidelity Non-Profit Management Foundation, and the Whitehead Institute for Biomedical Research. She is a life member of the MIT Corporation and a board member of the Belfer Center at the Harvard Kennedy School.

Author of The Age of Living Machines: How Biology Will Build the Next Technology Revolution