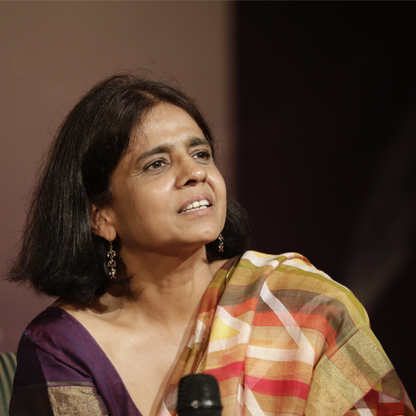 Centre for Science and Environment (CSE)

Sunita Narain is an environmentalist and writer, and presently serves as the director-general of the New Delhi-based Centre for Science and Environment (CSE), which she joined in 1982. Ms Narain through her research and advocacy has been influential in building public opinion on the challenges and solutions for environment, particularly in countries of the South. She has in her over 4 decades of work conducted in-depth research on the governance and management of the environment and directed campaigns on air pollution control, community water management and pesticide regulation and sustainable urbanization. Her effort to combine science-based evidence and solutions with a pro-poor perspective to mainstream environmental concerns in public policy and society has been richly awarded in India and internationally. Her ideas are built on the premise that environment and development are two sides of the same coin and that sustainable development is not possible without inclusive and equitable growth. For her lifelong and distinguished work in this area, she was awarded the Padma Shri, one of the nation’s highest civilian honours, by the Government of India. She was also made a member of the Prime Minister’s Council for Climate Change that decides on actions to address climate change impacts. In 2005, she chaired the Tiger Task Force at the direction of the Prime Minister, to evolve an action plan for conservation in the country after the loss of tigers from a protected reserve. She was also a member of the National Ganga River Basin Authority set up by the then Prime Minister to develop effective measures to conserve and clean up the river. She was awarded the Stockholm Water Prize in 2005 and the Prince Albert II of Monaco Foundation Award for her work to build a water literate society that values every raindrop and teaches society to learn from the frugality of our ancestors, to build a water prudent world. She was twice on the list of the world’s top 100 public intellectuals put out by Foreign Policy/Prospect, and in 2016, Time Magazine featured her as one of the 100 most influential people in the world for her advocacy on poor and the environment and climate change. Narain received “The Order of the Polar Star” award from the Swedish Government in 2017 and the Edinburgh Medal in 2020. She continues to serve on national and international committees on environment and work to research and build awareness about the urgency of action on environment and development.