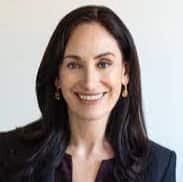 Shannon K. O'Neil is the vice president, deputy director of studies, and Nelson and David Rockefeller senior fellow for Latin America studies at the Council on Foreign Relations. She is an expert on global trade, supply chains, Mexico, Latin America, and democracy. Dr. O’Neil is the author of The Globalization Myth: Why Regions Matter (Yale University Press, October 2022), which chronicles the rise of three main global manufacturing and supply chain hubs and what they mean for U.S. economic competitiveness. She also wrote Two Nations Indivisible: Mexico, the United States, and the Road Ahead (Oxford University Press, 2013), which analyzes the political, economic, and social transformations Mexico has undergone over the last three decades and why they matter for the United States. She is a columnist for Bloomberg Opinion, and a frequent guest on national broadcast news and radio programs. Dr. O’Neil has often testified before Congress, and regularly speaks at global academic, business, and policy conferences. Dr. O’Neil has lived and worked in Mexico and Argentina. She was a Fulbright scholar and a Justice, Welfare, and Economics fellow at Harvard University, and has taught Latin American politics at Columbia University. Before turning to policy, Dr. O'Neil worked in the private sector as an equity analyst at Indosuez Capital and Credit Lyonnais Securities. She holds a BA from Yale University, an MA in international relations from Yale University, and a PhD in government from Harvard University. She is a member of the board of directors of the Tinker Foundation.