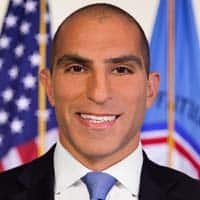 Rostin Behnam was nominated by President Trump as a Commissioner of the U.S. Commodity Futures Trading Commission (CFTC) in July 2017, was unanimously confirmed by the Senate in August 2017, and was sworn in to serve as a Commissioner in September 2017 for a term expiring in June 2021. The members of the Commission elected Commissioner Behnam as Acting Chairman effective Wednesday, January 20, 2021. Prior to joining the CFTC, Mr. Behnam served as senior counsel to U.S. Senator Debbie Stabenow of Michigan, Ranking Member of the Agriculture, Nutrition, and Forestry Committee. Mr. Behnam served as counsel to Senator Stabenow from 2011 through his 2017 appointment, focusing on policy and legislation related to the CFTC and the Department of Agriculture. Prior to serving Senator Stabenow, Mr. Behnam practiced law in New York City and worked at the New Jersey Office of the Attorney General. Mr. Behnam is a graduate of Georgetown University and earned a J.D. from the Syracuse University College of Law. Since joining the CFTC, Mr. Behnam has individually and as sponsor of the CFTC’s Market Risk Advisory Committee (MRAC) advocated for the CFTC to use its authority and expertise to ensure the derivatives markets operate transparently and fairly for participants and customers and innovate responsibly in addressing evolving market structures and products and the emergence and movement of risk across clearinghouses, exchanges, intermediaries, market makers and end-users within an appropriate oversight framework. Through his MRAC sponsorship, Mr. Behnam convenes leading market experts and public consumer groups to engage in public dialog on such timely issues as interest rate benchmark reform, central counterparty (CCP) risk and governance, evolving market structures, and since the summer of 2019, climate-related market risk.