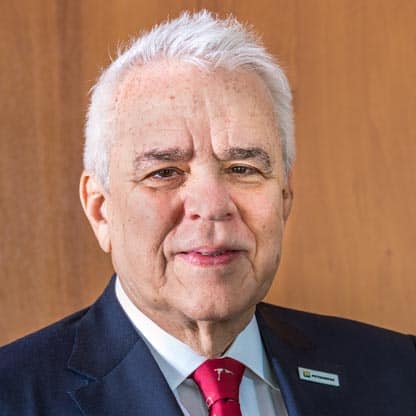 Roberto Castello Branco has been Chief Executive Officer and a member of the Board of Directors at Petrobras since January 2019. He holds a bachelor's degree in economics, with a PhD from Fundação Getúlio Vargas (FGV EPGE) and a postdoctoral fellowship from the University of Chicago. He participated in executive training programs at the Sloan School of Management (MIT) and the International Institute for Management Development (IMD). Prior to joining Petrobras, Castello Branco was affiliated professor at School of Economics and Finance (EPGE) and Acting Director at the Center for Economic Growth and Development, both at Getulio Vargas Foundation (FGV). From 1999 to 2014 he was a Managing Director at Vale S.A., one of the world´s largest mining company. Previously, he hold managerial positions at some private banks, as well as the Brazilian Central Bank. Castello Branco served at several boards of directors, including Petrobras’ (between May 2015 and April 2016). He has also been Director of the American Chamber of Commerce (RJ), President of the Brazilian Institute of Investor Relations and Vice President of the Brazil-Canada Chamber of Commerce. Under his leadership, Petrobras achieved expressive net income (US$ 10.2bi) and EBITDA (US$ 32.7bi) results in 2019. Castello Branco put forward a strategic plan focused on Oil and Gas exploration and production while actively managing the company’s portfolio. In 2019 Petrobras ranked amongst the top oil company in total investments. Another undertaking is a large scale cultural and digital transformation agenda driven towards value creation, resiliency and meritocracy.