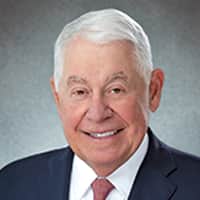 Chairman of the Board and Chief Executive Officer

With the company since 1989, Richard Adkerson is Chairman of the Board and Chief Executive Officer of Freeport-McMoRan Inc. Prior to joining the company, Mr. Adkerson was Partner and Managing Director at Arthur Andersen & Co. where he headed the firm’s worldwide oil and gas industry practice. From 1976 to 1978, he was a Professional Accounting Fellow with the Securities and Exchange Commission in Washington, D.C. Mr. Adkerson currently serves as Chair of the International Council on Mining and Metals. He has been a member of ICMM since 2005 and previously served as Chair from 2008 to 2011. He is a member of The Business Council, Business Roundtable, Council on Foreign Relations and serves as Chairman of the Advisory Council of the Kissinger Institute on China and the United States. He also serves on Greater Phoenix Leadership and the Dean's Council of 100 for Arizona State University W. P. Carey School of Business. Mr. Adkerson graduated from Mississippi State University with a B.S. degree in Accounting with highest honors and an M.B.A. degree. He also completed the Advanced Management Program of the Harvard Business School in 1988. For ten years, he was named The Best CEO in Metals and Mining by Institutional Investor magazine.