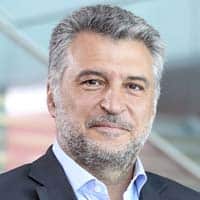 Professor Dr. Emmanouil Kakaras has been Executive Vice President NEXT Energy Business at Mitsubishi Heavy Industries EMEA since 1 April 2021. Prior to this role, he was Senior Vice President for New Products and Energy Solutions at MHI Group company Mitsubishi Power Europe since January 2018. Up until then he served as Vice President and Head of Research & Development at Mitsubishi Hitachi Power Systems Europe since September 2012. His R&D activities mainly focus on flexible operation of thermal plants, on fuel cells and electrolysers, the development of large-scale energy storage and the utilization of CO2. He is a member of the Board of Directors of EU Turbines. Professor Kakaras’ academic background is on clean energy generation technologies and since December 1991 he has been a Professor at the National Technical University of Athens, Greece. He has also been guest lecturer at the Universities of Warsaw and Tokyo. He participates as an external member in various working groups organized by the European Commission (CAG, Energy Committee), the Advisory Council of the Technology Platforms on Zero Emission Power Plants and on Smart Networks for Energy Transition as well as the Scientific Board of Industrial Associations (VGB, Rhein Ruhr Power, BDI). Professor Kakaras is also a member of several advisory committees of academic institutions (EASAC, Academy of Athens, EASE).