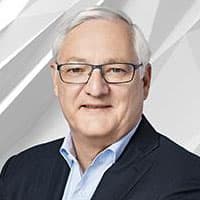 Peter Voser is Chairman of ABB’s Board of Directors since 2015 and has been interim CEO of the ABB Group from April 2019 to March 2020. He previously worked at ABB from 2002 to 2004, serving as the Group’s Chief Financial Officer and Member of the Executive Committee. Before returning to ABB as Chairman in 2015, Voser was CEO of Royal Dutch Shell from 2009 to 2013, and CFO and Executive Director of Royal Dutch Shell from 2004 to 2009. He began his career at Royal Dutch Shell in 1982 and has held several senior management and executive roles in Europe and Latin America, including Group Chief Internal Auditor, CFO of Shell Europe Oil Products, CFO of the Global Oil Products Business and member of the Oil Products Executive Committee. Voser is a member of the board of directors of IBM Corporation (USA), and of Temasek Holdings (Private) Limited (Singapore) as well as Group Chairman of the board of directors of Temasek’s subsidiary PSA International Pte Ltd (Singapore). He is also a member of the Asia Business Council and Chairman of the Board of the St. Gallen Foundation for International Studies. In June 2019, he was made an honorary director of Catalyst, a non-profit organization which champions women leaders, in recognition of his nine years of ser-vice on the Catalyst board of directors, including six as chairman. Voser has served as a board member of Roche Hold-ing Ltd., Switzerland (2011-19), of the Swiss Federal Auditor Oversight Authority (2006-10), of UBS (2005-10), and as a member of the Supervisory Board of Aegon N.V. in the Netherlands (2004-06). He obtained his degree in business administration from the Zurich University of Applied Sciences, Switzerland. In 2011, Voser was awarded the title “Dato Seri Laila Jasa” by His Majesty the Sultan of Brunei in recognition of services to the state of Brunei.