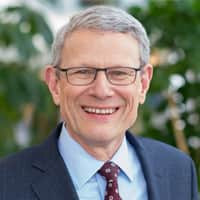 Paul K. Kearns has served as Director of the U.S. Department of Energy’s Argonne National Laboratory since 2017. Kearns manages a growing multidisciplinary science and engineering research center with an $831 million diversified research portfolio and more than 3,200 employees, 8,300 facility users, and 1,600 visiting researchers. Kearns served as Argonne Chief Operations Officer from 2010 to 2017. Kearns is a biologist and accomplished steward of diverse scientific resources to achieve ambitious goals in energy, environment, and national security. For over 30 years, Kearns has managed complex research and development enterprises by prioritizing science and technology leadership, operations excellence, and world-class talent. Kearns’ resume includes five years as an executive with Battelle Global Laboratory Operations and accomplished tenures with the U.S. Department of Energy’s Idaho National Engineering and Environmental Laboratory and Pacific Northwest National Laboratory. Kearns is a fellow of the American Association for the Advancement of Science. He serves on the Executive Committee of the DOE National Laboratory Directors’ Council and the U.S. Council on Competitiveness’ National Commission on Innovation and Competitiveness Frontiers. Kearns has a doctorate and a master’s degree in bionucleonics and bachelor’s degree in natural resources and environmental sciences, all from Purdue University. He and his wife, Lynn Kearns, have three children and four grandchildren.