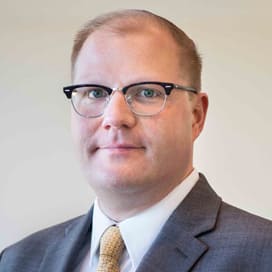 Nicholas A. Peters the Section Head for Quantum Information Science (QIS) at Oak Ridge National Laboratory (ORNL), where he manages more than 30 research staff and oversees a budget of more than $10 million. Under Peters’ direction ORNL has made significant contributions to quantum networking and computing, as well as the use of quantum information for enhanced cybersecurity. After completing his doctoral thesis on photonic entanglement from The University of Illinois Urbana-Champaign in 2006, Peters worked at Telcordia Technologies/Applied Communications Sciences in the Broadband Optical Networking Department for roughly a decade before joining ORNL in 2015. At ORNL, he has held progressive leadership roles including Team Lead and Group Leader while growing ORNL's QIS effort and founding the laboratory’s QIS section. Peters’ research has a wide array of applications and as such has been funded by the Department of Energy's (DOE's) Office of Science (Advanced Scientific Computing Research and High Energy Physics programs), DOE's Office of Cybersecurity, Energy Security and Emergency Response, DOE's Office of Electricity, The Defense Advanced Research Projects Agency, The Defense Threat Reduction Agency, The Office of Naval Research, and The Intelligence Advanced Research Projects Activity. He is co-inventor of 14 US Patents, garnering three licenses, and has coauthored more than 100 scholarly publications. He won a Thomas Alva Edison Patent Award in 2012, an R&D100 award in 2021, and multiple corporate-level awards, and is a Member of The American Physical Society (APS), a Senior Member of Optica (formerly OSA) and a Senior Member of the Institute of Electrical and Electronics Engineers (IEEE). Peters is an active referee and was recognized as an APS Outstanding Referee in 2022 (a lifetime achievement award). He has served as an Associate Editor for Optics Express since 2016.

Sessions With Nicholas A. Peters