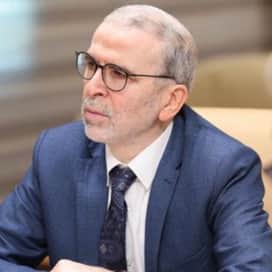 Mustafa Sanalla was appointed Chairman of the Board of Libya’s National Oil Corporation in May 2014. After graduating from Tripoli University in 1985 with a degree in Chemical Engineering, Sanalla joined Ras Lanuf Oil & Gas Processing Co. (Rasco), as Head of Ethylene Operations. He held increasingly senior positions within NOC before being appointed to the Board following the revolution. He became NOC Chairman on the retirement of his predecessor, Nuri Berruien. Sanalla has played a central role in protecting NOC’s operations from the violent contest to govern the country. He has publicly challenged those attempting to blockade Libya’s oil ports and facilities and has led the campaign, successfully, to add those who hold Libya’s oil hostage to the United Nations Security Council Sanctions List. Sanalla is a nationwide campaigner against smuggling and corruption, and an advocate for transparency and the fair distribution of national oil revenues. Despite these challenges and a lethal terrorist attack on NOC headquarters on 10 September 2018, NOC has increased production to over one million bpd, and in September recorded its highest production level since 2013. In November 2017, Sanalla was recognized by his global industry peers as Chief Executive of the Year at the Petroleum Economist Awards. In February 2021, Mr. Sanalla received the anti-corruption hero award presented by the United States Administration. During his term as Chairman of the Board of Directors of the National Oil Corporation, Mr. Sanalla maintained the impartiality of the National Oil Corporation, as an independent technical institution and far from all political disputes and quarrels, thus ensuring the preservation of the only source of income for all Libyans, and this matter contributed to the preservation of the unity of Libya throughout the previous decade.