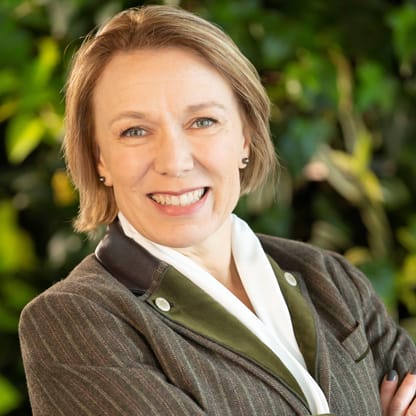 Miranda Ballentine has devoted her career to accelerating the role of advanced energy in national security, economic prosperity, and solving climate change, for which she was named the 2020 Woman of the Year by the Women’s Council on Environment & Energy. In September 2018, Miranda became the founding CEO of the Clean Energy Buyers Alliance with a vision of customer-driven clean energy for all, and an aspiration to achieve a 90% carbon free U.S. electricity system by 2030 and a global community of energy customers driving clean energy. The Alliance is made up of CEBA (the Clean Energy Buyers Association, formerly REBA), a business association activating a community of energy customers and partners to deploy market and policy solutions for a carbon-free energy system, alongside CEBI (the Clean Energy Buyers Institute), a public benefit charity dedicated to solving the toughest market and policy barriers to achieving a carbon-free energy system. In 2014, Miranda was appointed by President Obama and confirmed by the United States Senate as the 4th Assistant Secretary of the Air Force for Installations, Environment, & Energy. In that role which she held through the end of President Obama’s second term, she was responsible for a $9 billion annual energy budget and environmental programs for 9 million acres of land, 200 miles of coastline, 600,000 acres of forestland, and 270,000 acres of wetlands. She launched the Resilient Energy Demonstration Initiative (REDI), which developed smart, cyber-secure microgrids, including a “Future Forward Operating Base.” Previously, Miranda was Director of Sustainability for Global Renewable Energy at Walmart Stores, Inc, where she led a team in fifteen countries to develop strategies toward Walmart’s goal to be supplied by 100% renewable energy. These programs identified $1+ billion in potential annual energy savings and 9 million metric tons of avoided greenhouse gas potential. Her private-sector and non-profit career also included roles as CEO of Constant Power, Inc., a Toronto-based developer, integrator, and operator of distributed energy resources, and Managing Director of Rocky Mountain Institute's Business Renewables Center. In 2013, Miranda was selected to join the World Economic Forum’s Young Global Leaders, and in 2020 she was named the Woman of the Year by the Women’s Council on Environment and Energy. She has a BS degree from Colorado State University and an MBA from George Washington University. She lives in Washington, DC with her husband, daughter, and step-daughter.