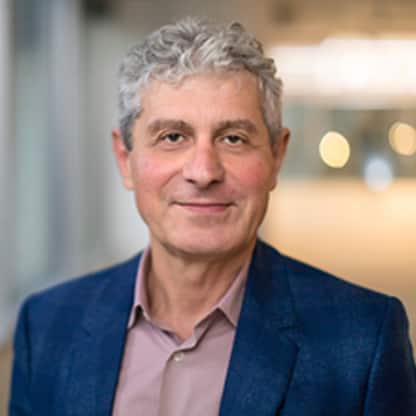 Michael Polsky is a successful serial entrepreneur, a leading energy industry innovator and Founder and CEO of Invenergy. Across four decades of historic change in energy markets and technologies, he has helped pioneer the development of the independent power generation sector and the deployment of cost-competitive clean and renewable energy. In 2001, Polsky founded Invenergy, a leading privately held, global developer and operator of sustainable energy generation solutions. With over 1,500 employees, the company has developed 187 wind, solar, battery storage and natural gas power projects totaling over 29.2GWs across the world. Polsky founded two predecessor companies to Invenergy. In 1985, he co-founded and was President of Indeck Energy Services where he led the development and financing of one of the first independent power generation portfolios. Under his leadership, Indeck rose to 38th on Inc. magazine’s list of fastest growing private companies in America. In 1991, Polsky founded SkyGen Energy. SkyGen built North America’s largest cogeneration portfolio over the course of a decade before being acquired by Calpine Corporation in 2001. A number of current Invenergy senior executives were part of the team first formed at SkyGen, which has one of the most successful track records in the industry. Polsky holds an MS in Mechanical Engineering from Kiev Polytechnic Institute and an MBA from the University of Chicago.