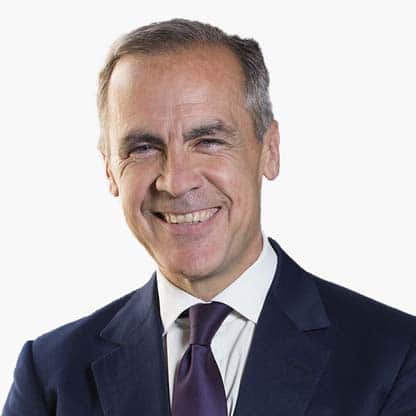 Mark Carney is currently the UN Special Envoy for Climate Action and Finance and Prime Minister Johnson’s Finance Adviser for COP26. Mark was previously Governor of the Bank of England (from 2013 to 2020), and Governor of the Bank of Canada (from 2008 to 2013). Internationally, Mark was Chair of the Financial Stability Board (from 2011 to 2018), He chaired the Global Economy Meeting and Economic Consultative Committee of the Bank for International Settlements (from 2018-2020) and was First Vice-Chair of the European Systemic Risk Board (from 2013-2020). He is Vice Chair of Brookfield Asset Management and a member of the Global Advisory Board of PIMCO, the Group of Thirty, the Foundation Board of the World Economic Forum, as well as the boards of Bloomberg Philanthropies, the Peterson Institute for International Economics and the Hoffman Institute for Global Business and Society at INSEAD. Mark was born in Fort Smith, Northwest Territories, Canada in 1965. After growing up in Edmonton, Alberta, he obtained a bachelor degree in Economics from Harvard and masters and doctorate degrees in Economics from Oxford. After a thirteen-year career with Goldman Sachs, Mark was appointed Deputy Governor of the Bank of Canada in 2003. In 2004, he became Senior Associate Deputy Minister of Finance. He held this position until his appointment as Governor of the Bank of Canada in February 2008.