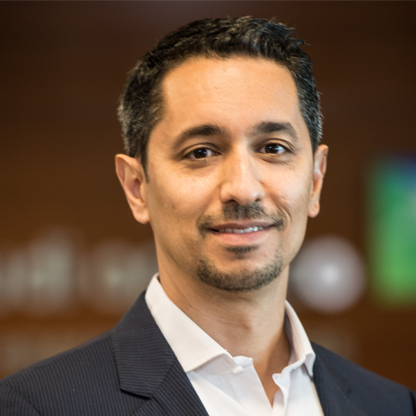 Mahdi is the CEO of Aramco Ventures, the corporate venturing arm of Saudi Aramco, overseeing investment activities of two different funds (SAEV and Prosperity7) with total Assets Under Management of more than $1.5 billion. Prior to his current role, Mahdi was Aramco’s Director of Base Oils & Finished Lubricants in which he led Aramco’s Global Base Oils Alliance and the development of the Aramco Lubricants business and brand. Mahdi has more than 23 years of experience spent in Downstream, Upstream and the Corporate Center, both in Saudi Arabia and internationally. Between 2013 and 2017, Mahdi worked in Motiva LLC in Texas where he led Strategy & Business Development. Between 2011 and 2013, he led various business strategies and corporate initiatives under the Strategic Transformation Office of Saudi Aramco. Prior to which, Mahdi was responsible for Downstream strategies under the Long Range Planning Department of Corporate Planning. Mahdi has also spent time as a Production Engineer overseeing oil field operations with a production capacity of 500,000 barrels per day in the Kingdom. Mahdi joined Saudi Aramco’s work force in 1998 as a Process Engineer in Ras Tanura Refinery, up to 2009, where he was involved in different engineering, operation, and planning roles. Between July 2015 and Dec. 2016 Mahdi worked as a process engineer in Chevron’s Richmond Refinery, California. Mahdi has a BS in Chemical Engineering and an MBA from King Fahd University of Petroleum & Minerals, he also has MSc in Chemical Engineering from Princeton University. Mahdi is also an alumnus of the Advance Management Program for executives from INSEAD University and a member of different board subsidiaries for Saudi Aramco.