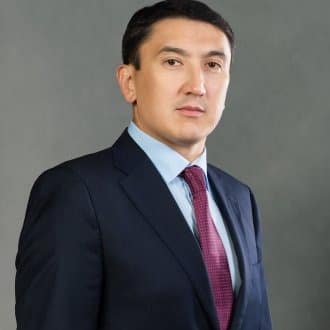 Chairman of the Management Board

Magzum Mirzagaliyev  is Chairman of the Management Board of the Joint Stock Company National Company (JSC NC) “KazMunayGas” (KMG) based in Kazakhstan. Prior to taking on the role of chairman, Mr. Mirzagaliyev held several senior government roles in the Republic of Kazakhstan, including Advisor to the President (January–April 2022), Minister of Oil and Gas (2021–22), Minister of Environment, Geology and Natural Resources (2019–21), Vice Minister of Energy (2014–19) and Vice Minister of Oil and Gas (2013–14). Prior to serving in the government, Mr. Mirzagaliyev held several roles in industry, including Deputy Chairman of the Management Board for Innovation-based Development and Service Projects (2012–13), Managing Director (2010–12) and General Director of TenizService LLP (2007–10) at JSC NC KMG. Previously he held roles as Business Development Manager, Production Operations Manager - Head of Aktau Branch at MI Drilling Fluids International from 2004 to 2007 and Drilling Fluid Engineer, MI Drilling Fluids International (Schlumberger), at the fields of Tengiz and Western Siberia from 2001 to 2004. Additionally, Mr. Mirzagaliyev has been awarded the Qurmet order (2021), Yeren Yenbegi ushin (2014), Kazakhstan Tauelsizdigine 25 zhyl (2016), For the Contribution to the Creation of the Eurasian Economic Union II degree (2015) and For the Contribution to the Eurasian Economic Union Development (2019) medals.