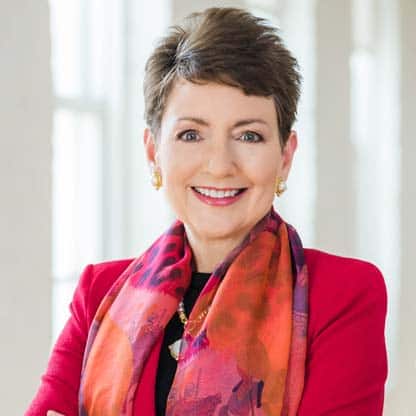 Lynn Good is chair, president and chief executive officer of Duke Energy, one of America’s largest energy holding companies. Under her leadership, Duke Energy has intensified its focus on serving its customers and communities well today while leading the way to a cleaner, smarter energy future. Before becoming CEO in 2013, she served as Duke Energy’s chief financial officer and earlier led the company’s commercial energy businesses during its initial development of renewable energy projects. She began her utility career in 2003 with Cincinnati-based Cinergy, which merged with Duke Energy three years later. Prior to 2003, she was a partner at two international accounting firms, including a long career with Arthur Andersen. Fortune magazine lists Good as 23rd among the “Most Powerful Women in Business,” and Forbes magazine calls her one of “The World’s 100 Most Powerful Women.” In 2016, she became the first regulated utility CEO designated as a LinkedIn Influencer – an online thought-leadership program – and recently ranked 9th on the Brunswick “Top 100 Connected Leaders” Index. Under Good’s leadership, Duke Energy is embracing new technologies and smarter solutions to transform for the future. In 2017, Duke Energy unveiled a 10-year vision to build a smarter, more resilient energy grid, generate cleaner energy and expand the company’s natural gas infrastructure. This strategy ensures customers have access to safe, reliable and clean energy while strengthening the company’s environmental stewardship. Since 2005, the company has reduced carbon dioxide emissions by 39% and plans to achieve net-zero emissions by 2050. Duke Energy has paid a quarterly cash dividend on its common stock for 95 consecutive years. The company has also been named to the Forbes list of “America’s Best Employers” and recognized by Fortune as one of the “World’s Most Admired Companies” in the electric and gas utilities industry. Good currently serves on the boards of directors for Boeing, the Edison Electric Institute, the Institute of Nuclear Power Operations, the World Association of Nuclear Operators, the Business Roundtable and myFutureNC. She also serves on the advisory council of the Bechtler Museum of Modern Art in Charlotte, N.C. Good holds Bachelor of Science degrees in systems analysis and accounting from Miami University in Oxford, Ohio. She and her husband, Brian, live in Charlotte.