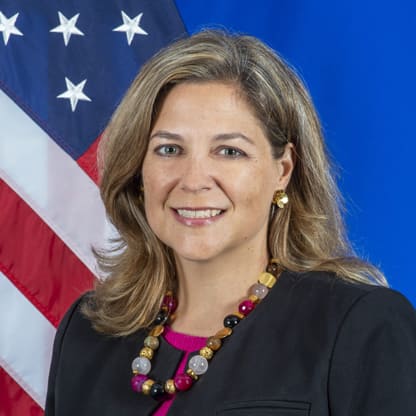 Kimberly Harrington is a career member of the Foreign Service with 19 years of diplomatic experience in the Middle East, Latin America, Africa and Asia. Currently, she is Acting Deputy Assistant Secretary for Energy Governance and Access in the Bureau of Energy Resources. From 2018 to 2020, she served as the Political and Economic Counselor at the U.S. Embassy in Kampala, including five months as acting Deputy Chief of Mission during the COVID-19 pandemic. She was the deputy Economic Counselor in Embassy Bogota from 2014-2018 during the signing and implementation of the historic peace accords that ended 50 years of civil war. Before that, she served as the political-military affairs officer in Jerusalem and worked as a political advisor to the United States Security Coordinator for Israel and the Palestinian Authority. Since joining the Foreign Service in 2002, Kim has also served in overseas assignments in Manila, Cairo, and Tripoli. In tours at the State Department, she worked as a staff assistant in the Bureau of Near Eastern Affairs and served in the Office of Innovative Engagement, teaching State Department officials on how to effectively use social media tools to advance policy objectives. During a detail at the Pentagon, Kim worked as a Middle East advisor in the Joint Staff’s office of Strategic Plans and Policy (J-5) during the Arab Spring. Prior to joining the Foreign Service, Kim received a Fulbright scholarship to Amman, Jordan. She was also an assistant producer for the Sunday morning political talk show The McLaughlin Group. Kim received a B.S. in International Politics from Georgetown University’s Walsh School of Foreign Service, and studied abroad at the American University in Cairo. During and after university, she worked as a researcher for several Washington, DC-based think tanks specializing in Middle East affairs. In 2021, she received a master’s degree in National Security Studies with a focus on Artificial Intelligence and Emerging Technologies at National Defense University in Washington, DC. She speaks Arabic, Spanish, and Tagalog and is a 2004 recipient of the Matida W. Sinclaire Award for excellence in the study of a hard language and its associated culture.