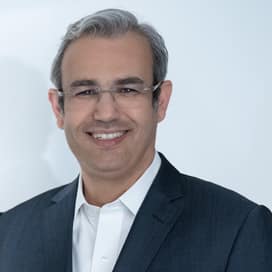 Member of the Executive Board

Karim Amin has been appointed Member of the Executive Board of Siemens Energy AG and a Member of the Executive Board of Siemens Energy Management GmbH as of March 2022. He is responsible for the Generation and Industrial Applications businesses and for Asia-Pacific and China. In addition, he is heading the Division Generation. Karim Amin joined Siemens in 2001 and has held a series of global leadership positions in Service operations, sales and strategy in the company’s power and energy businesses that gave him a deep understanding of power plant operations and customers’ business drivers. In 2011 he was appointed Senior Vice President for Siemens Energy Service in the Middle East and North Africa. He continued his career in the Oil & Gas sector and took over as CEO for the Global Siemens Oil & Gas unit in 2014. Karim Amin developed and led the Global Sales team for Power Generation from 2015 before heading the product business unit of Gas and Steam Turbines. As Executive Vice President he has been leading the Power Generation division since 2020 with significant results in business. He holds a bachelor’s degree in Electrical Engineering from Cairo University in Egypt, and a Master’s in Business Administration from Warwick University in the United Kingdom.