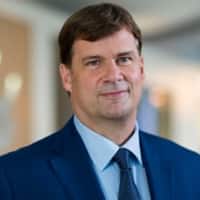 As president and chief executive officer of Ford Motor Company, Jim Farley is focused on delivering value for customers by executing the Ford+ plan for growth, offering world-class electric and connected vehicles, and “always-on” customer relationships. Farley also serves as a member of Ford’s board of directors. Since becoming CEO on October 1, 2020, Farley has reshaped the company with a strategy that responds to the changing automotive industry. Under his leadership, Ford has focused on combining the company’s foundational strengths with new capabilities in disruptive technologies, and on meeting customer needs through compelling products, enhanced digital and connected services, and major investments in sustainable manufacturing. Farley joined Ford Motor Company in November 2007 and has served in a variety of leadership positions across global markets. Most recently, as chief operating officer, Farley worked to strengthen Ford’s automotive operations, overseeing all of Ford’s global markets, automotive operations, Ford Mobility Partnerships and Ford Autonomous Vehicles LLC. Farley serves on the board of directors of the U.S. China Business Council, is a member of the Business Roundtable and the Michigan Executive Climate Advisory Group, and is a co-chair of the Coalition for Reimagined Mobility. In his personal capacity, Farley serves on the board of directors of Harley-Davidson, Inc., and supports the Pope Francis Center, a non-profit service organization working to eradicate chronic homelessness in Detroit by 2030. Farley has been racing vintage cars for over a decade, including a 1965 Ford GT40. Born in 1962, Farley earned a bachelor’s degree in economics from Georgetown University and a degree in management from the Anderson School of Management at University of California, Los Angeles (UCLA). He and his wife, Lia, have three children.