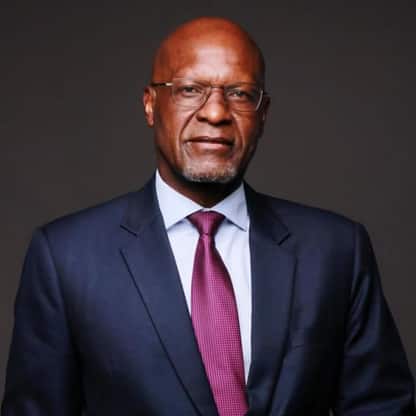 Ministry of Mines and Energy, The Republic of Namibia

Hon. Tom Alweendo, is the Minister of Mines and Energy in the Cabinet of the Republic of Namibia. Born on 17 March 1958, in Okahenge, Oshana Region, Hon. Thomas Kavaningilamo Alweendo was appointed as Minister of Mines and Energy in February 2018 by President Hage G. Geingob. Prior to his appointment, Alweendo was the Director General of the National Planning Commission appointed by former President, H.E Hifikepunye Pohamba as Director General of the National Planning Commission (NPC). The National Planning Commission is a Constitutional body that is tasked with the responsibility to plan the priorities and direction of national development. In March 2015 he was appointed by President Hage G. Geingob as Minister of Economic Planning and also as Director General of the NPC. His extensive economic experience stems from having served as the Governor of the Bank of Namibia from January 1997 to March 2010. Alweendo was the first Namibian to serve as Governor of the Central Bank when he was appointed by Namibia’s Founding President Sam Nujoma. Before being appointed as Governor, he served as Deputy Governor for four years (1993-1996). Among some of his achievements during his tenure at the Bank of Namibia are the establishment of the local currency, the Namibia Dollar; the localization of the payments and banking systems; and the establishment of the Financial Intelligence Center. As Director General of the National Planning Commission, he presided over the drafting of Namibia’s fourth National Development Plan (NDP4). The NDP4 prioritized specific economic sectors that are perceived to have more potential to grow the economy and provide employment opportunities. This is notably agriculture, logistics, tourism, and manufacturing. The Plan also propounds a hands-on approach with regard to the Government’s role in economic development albeit in closer and effective collaboration with the private sector. Over the course of the NDP4 period the Namibian economy grew on average at 5.7 percent, despite the global economic crises and current global commodity crises. The Ministry of Mines and Energy (MME) is the State’s lead agency in attracting private investment in resources exploration and development through the provision of geoscientific information on minerals and energy resources, and management of an equitable and secure titles systems for the mining, petroleum and geothermal industries. As the Minister of Mines and Energy, he seeks to provides access to Namibia's geological, mineral and energy resources for sustainable economic growth, equal benefit and prosperity to all Namibian citizens. He is a firm believer that with ordinary talent, combined with extraordinary perseverance and buttressed by meritocracy, all things are achievable. An avid reader and knowledge seeker, Hon. Tom Alweendo holds a Bachelor of Commerce from the University of Witwatersrand, Johannesburg, South Africa and a Masters in Business Administration (MBA) from the University of Wales.