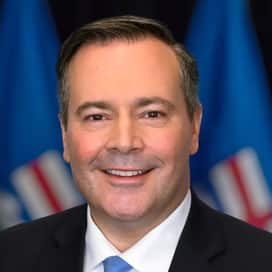 Hon. Jason Kenney, 18th Premier of Alberta, began his career in public service in 1989 as the first Executive Director of the Alberta Taxpayers Association and later President of the Canadian Taxpayers Federation. He subsequently won election to Ottawa as the Reform Party Member of Parliament for Calgary Southeast; helped unite and expand the modern Conservative Party of Canada, growing its support among new Canadians; and held multiple cabinet posts during its first decade in government. Returning to Alberta in 2016, Hon. Kenney won the leadership of the Alberta Progressive Conservative Party, later winning a referendum creating the new United Conservative Party (UCP), election as UCP leader, a seat in the Legislature as Leader of Her Majesty’s Loyal Opposition, and in April 2019, led his party to a majority government with the highest vote tally of any party in provincial history. Hon. Kenney attended the University of San Francisco.