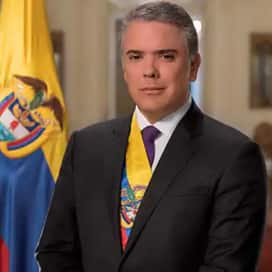 Born in Bogotá in August 1st, 1976. He holds a law degree from Universidad Sergio Arboleda. He is an expert in economic affairs, with executive studies in Harvard; he holds a Master’s Degree in Public Policy and Public Management from Georgetown University, and a Master’s Degree in Economic Law from the American University. He was Head of the Culture, Creativity, and Solidarity Division at the Inter-American Development Bank (IDB), where he worked on social innovation, entrepreneurship, youth, and creative economies. He acted as a consultant to the IDB presidency and as a senior advisor for Colombia. Besides his legislative activity, Ivan Duque has stood out in several of the country’s political developments. He drafted, submitted, and defended, before the Constitutional Court, the suit against the Legislative Act for Peace that limited the fast track and allowed Congress to make changes to the implementation of the peace agreements with the FARC. In 2016, Semana magazine and Fundación Colombia Líder (“Colombia Leader Foundation”) elected him as one of the most outstanding leaders of the country. On 17th June, 2018, Ivan Duque was elected President of Colombia for the 2018-2022 constitutional term with a government program based on Legality, Entrepreneurship, and Equality.