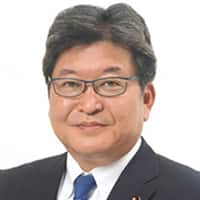 Minister of Economy, Trade and Industry

Mr. Hagiuda Koichi was appointed Minister of Economy, Trade and Industry (METI) on October 4, 2021. He also assumed the roles of Minister in charge of Industrial Competitiveness, Minister for Economic Cooperation with Russia, Minister in charge of the Response to the Economic Impact caused by the Nuclear Accident and Minister of State for the Nuclear Damage Compensation and Decommissioning Facilitation Corporation. Immediately prior to his current appointments, Mr. Hagiuda served as Minister of Education, Culture, Sports, Science and Technology (MEXT) and Minister in charge of Education Rebuilding, positions he held since September 2019. Previously, Mr. Hagiuda held several senior posts in the Liberal Democratic Party (LDP). Earlier in his career, Mr. Hagiuda served as Parliamentary Vice-Minister of Education, Culture, Sports, Science and Technology. Mr. Hagiuda has served as member of Japan’s House of Representatives since 2003. He is currently serving his 5th term in the House of Representatives, representing Tokyo’s 24th district. Previously, he served as an elected official on the Metropolitan Assembly of Tokyo and Hachioji City Council. A graduate of Meiji University’s School of Commerce, Mr. Hagiuda was born on August 31, 1963, in Tokyo.