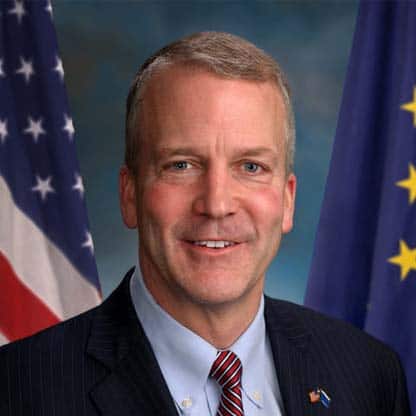 Dan Sullivan was sworn in as Alaska’s eighth United States Senator on January 6, 2015. Senator Sullivan serves on four Senate committees vital to Alaska: the Armed Services Committee, where he is Chairman of the Subcommittee on Readiness; the Environment and Public Works Committee; the Veterans' Affairs Committee; and the Commerce, Science and Transportation Committee, where he is Chairman of the Subcommittee on Oceans, Atmosphere, Fisheries and Coast Guard. Senator Sullivan has been able to pass numerous bills and amendments related to rebuilding and modernizing our country’s military, responsible resource development, reining in federal overreach, spurring economic development, expanding benefits for our veterans, and helping those who are most vulnerable, including victims of sexual assault and domestic violence. Prior to his election to the U.S. Senate, Senator Sullivan served as Alaska’s Attorney General and Commissioner of the Alaska Department of Natural Resources—where he focused on pushing back on federal government overreach and growing Alaska’s economy. Senator Sullivan served in the George W. Bush Administration as the U.S. Assistant Secretary of State for Economic, Energy, and Business under Secretary of State Condoleezza Rice and as a Director in the International Economics Directorate of the National Security Council staff at the White House. He is currently an infantry officer in the United States Marine Corps Reserve, were he was recently promoted to Colonel and is Chairman of the International Republican Institute (IRI). Senator Sullivan holds a B.A. in Economics from Harvard University and a joint Law and Masters of Science degree in Foreign Service from Georgetown University. He and his wife, Julie Fate Sullivan, live in Anchorage, Alaska, and have three daughters.