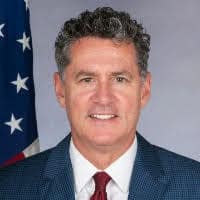 Harry R. Kamian became Senior Bureau Official and Principal Deputy Assistant Secretary for the Bureau of Energy Resources (ENR) on September 7, 2021. He is a career member of the Senior Foreign Service, rank of Minister Counselor. Harry most recently served as Principal Deputy Assistant Secretary and Acting Assistant Secretary for ENR. Prior to this appointment, Harry served as Chargé d’Affaires at the U.S. Embassy in Reykjavik, Iceland. Previously, he served as Deputy Chief of Mission and Deputy Permanent Representative to the U.S. Mission to the Organization for Security and Cooperation in Europe (OSCE) from August 2017 to August 2020. During the first two years, Harry served as Chargé d’Affaires and Acting Permanent Representative. Harry served as Deputy Executive Secretary in the Department of State’s Executive Secretariat, where from 2015-2017 he worked with the Secretary’s staff, Bureau leadership and Chiefs of Mission to shape and execute overseas visits by the Secretary to advance U.S. policy goals. Prior to that, Harry served as the Director and Deputy Director of the Operations Center, the Department’s 24-hour crisis center. Other overseas postings during Harry’s 29-year career include assignments in Vietnam, Chile, Turkey, Cuba and El Salvador. In Washington, DC, his assignments have included Deputy Director of the Quadrennial Diplomacy and Development Review, as well as positions in the Bureau of Near Eastern Affairs and on the staff of the Secretary of State in the Operations Center. Harry is the recipient of numerous Superior Honor and Meritorious Honor awards. Harry received a Master of Science in Foreign Service from Georgetown University, and Bachelor of Arts degrees in International Relations and Spanish Language from the University of California, Davis.