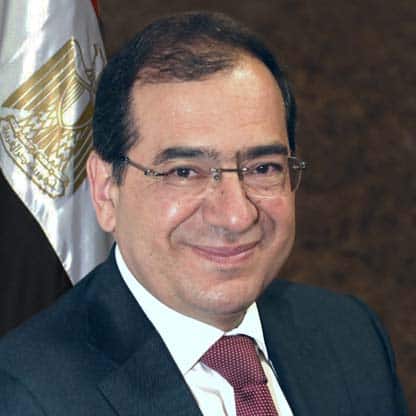 HE Eng. Tarek El Molla was appointed Egypt’s Minister of Petroleum and Mineral Resources on 19 September 2015. Prior to joining the Government of Egypt, he joined Egyptian General Petroleum Corporation (EGPC) in January 2011 as the Deputy Chief Executive Officer for both Foreign Trade and Internal Trade & Operations. HE Eng. El Molla was later appointed EGPC’s Chief Executive Officer in 2013. He began his career at Chevron in Egypt in 1987, where he held roles in engineering, operations, planning, sales, and marketing for over 20 years. In 1998 he became Sales Manager and a member of the Board of Directors for Chevron Egypt S.A.E. From 2002 to 2008, HE Eng. El Molla held several assignments and managed projects in Dubai, Kenya, and Singapore. In 2008 he became Managing Director–Marketing of Chevron Egypt. From 2008 to 2010, he served as Regional Manager of Chevron South Africa, responsible for South and Central Africa’s commercial and industrial business. He holds a BS in mechanical engineering from Cairo University. On May 2017, the French President awarded him the “Ordre National de la Legion D’Honneur” at the rank of Knight. On November 2020, the President of the Hellenic Republic awarded him the “Grand Commander of the Order of Phoenix.”