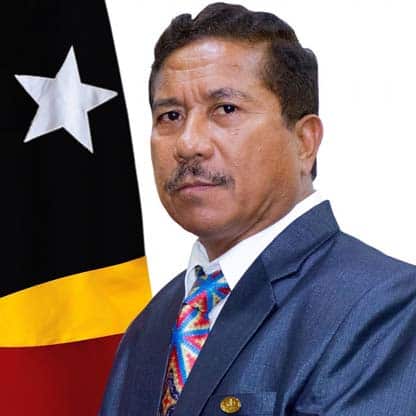 Minister of Petroleum and Minerals

Dr. Victor da Conceição Soares is originally from the Baucau municipality, eastern part of Timor-Leste. He got Bacharel in Mechanical Production from the Bandung Institute of Technology, Indonesia in 1992 and Honor Degree in Mechanical Engineering from the University of Catholic Widya Karya Malang, Indonesia in 1999. In 2004 he has completed the Master Degree in Mechanical Engineering from the Nagaoka University of Technology, Japan and completed his PhD in Technical Science of Territorial Planning and Environment from the University of Evora, Portugal which majoring in Biosystems Engineering, Renewable EnergyWind Power. He served as the Lecturer in Mechanical Engineering Department from the National University of Timor-Leste/UNTL from 2000 until present and as Researcher in Mechanical Engineering, Renewable Energry including Wind Power. He has appointed as the Dean for the Faculty of Engineering at UNTL from 2007 to 2010 and he served UN – Local Staff Member as the Supervisor for UNAMET-UNTAET Security Services from 1999 to 2001. He also appointed as the Member of UNTL General Council Member from 2017 – 2020 and Sientific Council Member in the National Institute for Science and Technology of Timor-Leste.He has received two awards such as: 1st was the UN Certificate Award as the UNAMET Staff Member in 2000 and the 2nd award was condecoration for Combatent of National Liberation of Timor-Leste in 2013. Dr. Victor has appointed as the Vice-Minister of Education for Technical and Higher Education from 2006 to 2007 and from June 2020 to present as the Minister of Petroleum and Minerals within the 8th Constitutional Government of the Democratic Republic of Timor-Leste. His career as the Engineering Lecturer, Researcher, and Politician.