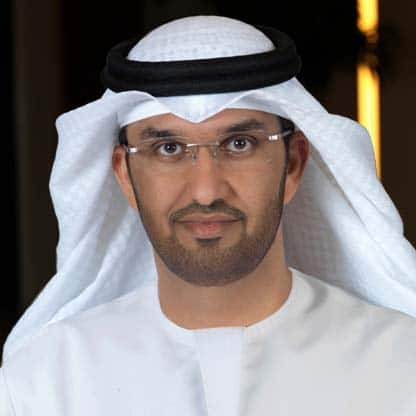 HE Dr. Sultan Ahmed Al Jaber is a Minister of State of the United Arab Emirates and a member of the federal cabinet. In 2016, he was appointed Group Chief Executive Officer of ADNOC, where he has overseen a program of increased efficiencies, strengthened ADNOC’s overall performance, and fostered a more commercial mindset. HE Dr. Al Jaber has also led the company in a digital transformation to ensure that ADNOC stays ahead of global energy demand and remains a key contributor to the UAE’s economy. Previously, HE Dr. Al Jaber was the Chief Executive Officer of the Energy Platform at Mubadala, the Abu Dhabi government’s strategic investment arm, where he established Abu Dhabi’s pioneering renewable energy initiative, Masdar, in 2006. He served seven years as its CEO and continues to serve as its Chairman. HE Dr. Al Jaber also holds additional leadership roles, including Chairman of the UAE National Media Council and Chairman of Abu Dhabi Media Company. HE Dr. Al Jaber is an active member of the Emirates Diplomatic Academy Board of Trustees, and Chairman of the Board of Trustees of the Mohamed bin Zayed University of Artificial Intelligence, the world’s first graduate-level research-based Artificial Intelligence (AI) University.