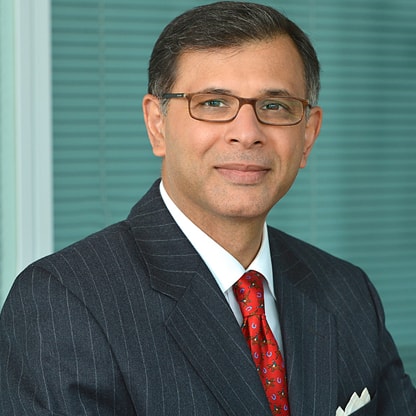 Girish Nadkarni is the Chief Executive Office of Total Carbon Neutrality Ventures, the $400m corporate venture fund of Total, S.A., based in Paris. Prior to that he was the founder and President of ABB Technology Ventures, the corporate venture arm of ABB. During his 15-year career at ABB, Girish ran the global automotive business for ABB’s Robotics Division and was global head of strategy and marketing for the Automation Division. Girish started his career as an attorney on Wall Street with the firms of Coudert Brothers and Shearman & Sterling focusing on international banking and M&A. He started his business career at Prudential where, among other things, he was responsible for creating the innovative Pru-Shelf financing facility which currently has 750 customers with a portfolio value of $74 Billion. Next, he moved to GE Capital as head of business development for one of its then three divisions and GE where he worked for Jack Welch on strategy and business development. He moved to United Healthcare as chief operations officer. He left to found vSimplify, a VC funded startup which was a pioneer in the cloud based (ASP) business services area. Girish earned his undergraduate and law degrees from the University of Bombay where he was a Gold Medalist, his Master of Law degree from the University of Virginia which he attended as a DuPont Fellow, and an MBA from Harvard where he was designated a Baker Scholar. Girish has served on the boards of companies in the US, France, China, Israel and UK. He is currently on the Board of Directors of the $1.2 billion OGCI Climate Investments fund and on the Investment Committee of Creadev, the venture arm of the Mulliez Family in France. Girish is considered a thought leader in the area of corporate venture investing and is a frequent speaker at venture capital and industry conferences around the world. His advice is often sought by major companies which are looking to start or reposition their corporate venture groups. Girish was on the selection committee to choose the World Economic Forum Technology Pioneers for a number of years. Girish has been listed on the Global Corporate Venturing Power List 100 for the past 6 years and was listed #20 last year. Girish is currently leading Total’s effort to rise a €2 billion global Clean Hydrogen Fund along with Air Liquide and Société Générale.